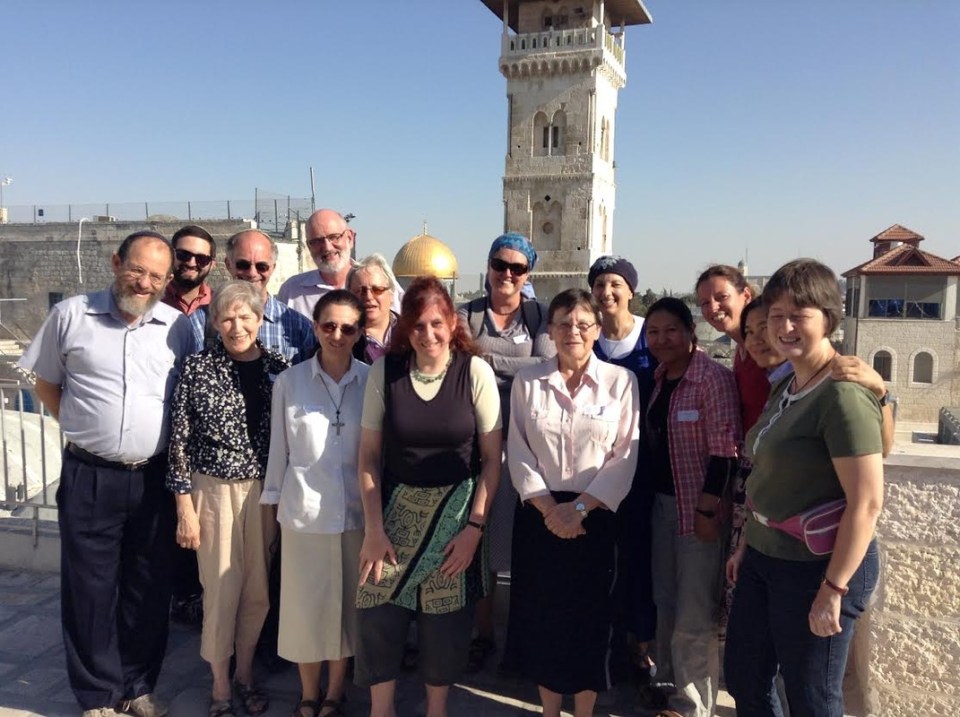 The program opened with an orientation to the site of Ecce Homo, the second Station of the Cross on Via Dolorosa. According to Christian tradition, the Ecce Homo Arch spans in the exact location where Pontius Pilate ordered Jesus Christ to be brought in front of the roaring crowd. Pilate cried, ”Ecce Homo” – ”Behold the man’’.  The arch was constructed during the 2nd century by Emperor Hadrian and served as part of the entrance to the Forum of Aelia Capitolina.  The venue for the seminar, the Sisters of Sion Monastery, guest house and school, was founded alongside the arch in 1857 by the Father Alphonse Ratisbonne, a French Jew who converted to Catholicism and became a Jesuit priest who was determined to educate Christians about their faith’s Jewish roots. Since Nostra Aetate in particular, the site has been dedicated to improving understanding between Christians and Jews, and, more recently, Muslims. Beneath the cluster of buildings is a remarkable archaeological site, the lithostratos, with many artefacts showing life in Roman times and supporting the significance of the site.  Participants in the seminar not only appreciated the opportunity to visit the lithostratos below, but were able to enjoy the incredible views of the Old City of Jerusalem from Ecce Homo’s top levels.

The opening panel on Monday morning featured Professor Haviva Pedaya from Beer Sheva University, a member of the Hermes Forum , Abbot Gregory Collins of the Dormition Abbey and Professor Mohammed Dajani Daoudi of Wasatia, speaking about the meaning of prayer from their respective traditions. Many participants resonated with Abbot Gregory’s analogy of true prayer being able to be accomplished when one ‘dives into the swimming pool and lets the water hold you afloat’, in contrast to someone who is so concerned about swimming that he trashes about and drives himself to the bottom of the pool. Haviva described two models of individual prayer that were introduced into Judaism in the 18th Century – the first, a model of annihilation of the individual and the attempt to merge into that which is greater than oneself; the second, an attempt to move inwards and find one’s personal centre. Both models require meditation and concentration quite different from the formal, fixed communal prayers that characterise mainstream Jewish prayer.

The panel was followed by text-study sessions, which were a daily feature of the program. Learning in small groups enabled all participants to be active learners, to share their interpretations and ask their questions. Each study circle responded differently to the various texts presented by a diversity of teachers throughout the week. Teachers included Sr Maureena Fritz of the Bat Kol Institute, Rabbi Daniel Goldfarb of the Conservative Yeshiva, Aart Brons of the Stichting Centrum voor Israëlstudies, Sheikh Ghassan Manasra of the Peace Centre of Nazareth and Peta Jones Pellach, Elijah’s Director of Educational Activities.

Another feature of the program was bibliodrama, conducted by expert, Yael Unterman. Participants almost unanimously declared the three bibliodrama sessions to be the highlights of the program for them. Elijah participated in a project funded by the EU (BASICS) to explore bibliodrama as a method for interreligious dialogue and as a result of that project, is now convinced of its value and is committed to using, sharing and teaching the methodology. Texts studied through the week using bibliodrama included the story of Hannah, from 1 Samuel:1; the parable of the tax collector from Luke 18; and the story of Job from Jewish, Christian and Muslim perspectives. For most participants, this was their first experience of bibliodrama and they reported that although they felt inhibited in the beginning, they all felt liberated to experience prayer differently by identifying with various characters from the texts. The empathy helped them understand others and also understand themselves and their own faiths more clearly.

There were three opportunities to experience the religious experience of others in their own settings. On Monday night, a small group went to the Western Wall (the Kotel) to join Jewish worshippers. Peta Jones Pellach explained the significance of this historic site which has become a sacred site and prayer venue. One of the Christian participants reported that although she had been to the Kotel before, this was the first time she had prayed there. On Tuesday evening, the group went to vespers at the Dormition Abbey and after a beautiful and moving musical experience, Abbot Gregory explained more about the importance of prayer for a monastic community. For Christians, the experience was one of welcoming others into their community; for non-Christians, the experience was both intellectually enriching and spiritually uplifting. On Wednesday, the meeting at Wasatia was very significant for both Christians and Jews. Many said that hearing from Muslims who are committed to the positive values of Islam, who see religion as demanding from them respect for the other and who are striving to share their vision with their co-religionists, gave them a great deal of hope. It was also interesting to meet in the family home of Wasatia founder, Professor Dajani Daoudi and to learn about the history of the house.

On Tuesday morning, Elijah founder and director, Alon Goshen Gottstein, who had chaired two panels on Monday, joined Ghassan Manasra and Aart Brons in describing ‘Why we Pray’ in each of the traditions. It was fascinating to discover the contrasts between the levels of obligation and the formal practices each speaker described. Whereas Judaism and Islam see prayer as a ‘legal’ obligation, for Christians it is both and expression of their commitment and a way of following the model of Jesus, but it is not obligatory in the same was as it is in the other two faiths. There was also an interesting discussion on the place of study of sacred texts as part of the prayer ritual. Wednesday’s presentations took the form of three ‘master classes’ on the fixed prayers in each tradition. Joining the faculty for the morning was Fr Eamon Kelly of Notre Dame, whose humour and sincerity were greatly appreciated.

Another highlight of the program was learning from Professor Paul Fenton of the Sorbonne, another member of the Hermes Forum. Paul explained how Sufi practices entered into Jewish life as early as the 13th Century and led the group in a very brief meditation practice. As the program unfolded, participants were ready to tackle the difficult questions about the opportunities for and impediments to shared, interreligious prayer. Yehuda Stolov of Interfaith Encounters and Alon Goshen-Gottstein presented a thought-provoking session on the topic. The final day was devoted to looking at Jerusalem as a House of Prayer, through sources from the traditions and as an aspiration for the future. Alon surprised participants when he presented Elijah’s HOPE vision and the response to the idea of people of different faiths prayer alongside each other, each in their own way, elicited a most positive response. Indeed, many described the idea as a great inspiration.

It was not just the formal presentations which people found inspiring. At the evaluation session at the end of the program, some mentioned the social bonding, the community-building, which had taken place. This included the benefits of eating lunches together, walking through the streets of the city as a multi-faith group, informal conversations, the meditation experience and the Israeli dance session.

Thank you to members of the Elijah Board of World Religious Leaders who provided sponsorship to enable local Palestinian and Israeli participants to join the overseas contingent.

During the seminar, a journalist from the Jerusalem Post came to observe activities and to interview participants. Her report, which was featured on the front page of the local segment of the weekend paper